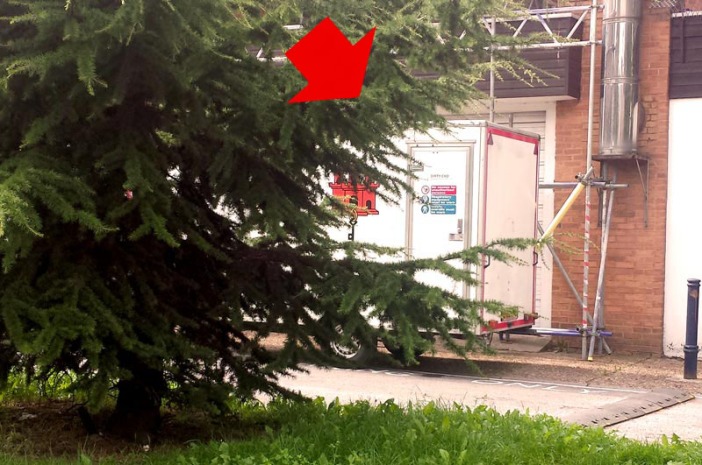 I am walking through Mary Datchelor Close; a rather featureless and barren-looking 1970s housing block, in colour, annexed between Church Street and Camberwell Green Youth Court. To what purpose as yet unknown. A hunch, maybe. I am aware that, encapsulated within the almost deathly stillness of this afternoon, there is a feint droning sound seeping out from somewhere within the heart of the estate. It is a nauseating tone; more like some sub-larynxial movement of the estate itself, leaking out from where the buildings join the pavement, almost inaudible. I decide to investigate further, my curiosity having been piqued by the intense monotony of the drone, practically uncertain of whether it originates from inside or outside.

I swiftly go ‘incognito’ by putting on the appearance of someone who is just going up the shops for a pack of fags or doughnuts or something. So as not to draw any hostile attention. I move furtively from wall to wall around the estate, pausing now and then to press my ear to a surface, tracing my way back to the source of this monotony. Sooner or later my ears, hands, feet and other apparatus draw me to an unmarked white Ford Transit van parked up in front of a house. Attached to it is a curious-looking industrial trailer with lots of warning stickers all over it and all these dirty plastic hoses leading from the underside of the trailer unit and in through the kitchen window of the house. Judging by the droning sound, the trailer is either pumping something into the house or sucking something out. It is impossible to tell which.

There is a lot of congestion in each of the fist-thick pipes which probably accounts for the noise itself – the vibrations of an engine working way beyond its capacity, over-strained. As it coughs and splutters under its difficult burden, a viscous tar-like liquid – like some kind of filthy amber – is seeping out from a tear in one of the pipes and is coagulating in a puddle around one of the tires. I watch this process for some time. The dripping motion of the fluid is so inexorably slow, I almost cannot see it , but I keep watching all the same. It’s almost as though there were no movement at all, and I cannot understand how that can be. Perhaps if I slow down to the same speed, synchronize with the drip…? Danger. I could get stuck here forever; it’s happened before. It happens all the time. This fluid could be some sort of highly concentrated boredom, and therefore one ought to proceed with a high degree of caution.

Just as I’m thinking this thought, I suddenly become aware of three pairs of eyes watching me through the dirty lace curtain in the kitchen window of the house.  The front door unlocks and out of it emerges a trio of workmen. The eyes must have been theirs, I conclude. As they walk towards me I notice the protective white plastic garments they are wearing – a bit like how you might imagine a team of engineers to look in one of those sci-fiction movies; engineers who’ve been charged with digging up the remains of some ancient alien object buried deep beneath London streets and sewers, deeper even than the Tube, deeper than the unconscious.

I decide to respond cautiously to this unfolding situation, and to that end I make a gesture towards the puddle accumulating round the trailer tire. My gesture, (perhaps tinged with a shade of divisive malice – a bit of divide-and-rule,) causes two of the engineers to suddenly become animated, and they start bickering to each another in whispers and hushed whelps. The two of them, in their Laurel and Hardy-ish way, try to hide behind the back of the third man who is – I now notice – somewhat taller and more impressive-looking than the others. Having removed their protective masks and outer gear, I find it almost impossible to imagine how I could ever have thought all three men were the same size just a moment ago. The two animated engineers are considerably more scrawny, undernourished and pathetic than the foreman. He just looks straight through me, as though my presence was, to him, little more than a detail in the landscape of his work day.

Without my noticing, one of the two thin men has placed a vase under the drip in an effort to minimize the waste of, (or to prevent contamination by,) this strange fluid. The second thin man just watches the other with a strange intensity, his hand down the front of his trousers, eyes rolling backwards into his skull, vibrating.

I must escape before this situation achieves some kind of zenith that I would rather not be a party to.

Gesturing again to the puddle, (and stamping my foot so as to underline the gesture,) I remind the foreman how instrumental I was in the recovery of this [apparently] precious fluid; had I not been passing, a great deal of it might have been wasted – and he knows it, too. Thinking about it a second time however, I then wonder if he wasn’t just ignoring the gross misconduct of his colleagues in their wastage of the fluid, so as to spare me – an outsider – from the spectacle of their punishment. But, having indicated the leak for a second time, their mistake could no longer be overlooked by the foreman. They alternately throw hostile glances at me for having betrayed their incompetence, clawing at my conscience for a life line, pleading for me to toss even the smallest thread of hope to which they can cling for even the weakest of assurances. But this hardly bothers me much – on the contrary, it brings me pleasure to know that I will be able to escape when their punishment begins.

The foreman picks up the vase in slow-motion and slugs its contents with a single discharge of his gorge. His stern gaze, then dissolving into small rivulets of moisture in the corners of his eyes, echoes the dark patch spreading out around his crotch, a Rorschach image clinging to the inside of his thighs, steaming in the cold air.

As I slip away from the narrative lurking in the housing estate, I see in my minds eye the faces of those thin men which seemed to say – ‘It was the boredom that did it; your boredom! And we will never forgive you.’ Or at least that’s what I try not to tell myself as the droning sound fades into the distance, becoming little more than part of the background of the afternoon, a layer of autumnal parallax. To be sure, a million such monotonies lurk in the plain light of day, each threatening to disturb the apparent order of things. But if it really is my boredom that is responsible, if my boredom carries such charge as to be able to draw latent possibilities out of the monomanias of an afternoon, I am pretty certain that my being there to watch them unfold won’t really change anything.

The whole project to which this text belongs may be seen here: NEO-LONDON